There were many characteristics of Fianna Fáil that we wished to communicate when we redeveloped their website. Primarily, we looked to the core strength of the party and we chose to amplify the dynamic grassroots of the party. It is at this local level that they wished to rebuild their online presence, and communicate that they were a party of experience and effectiveness. 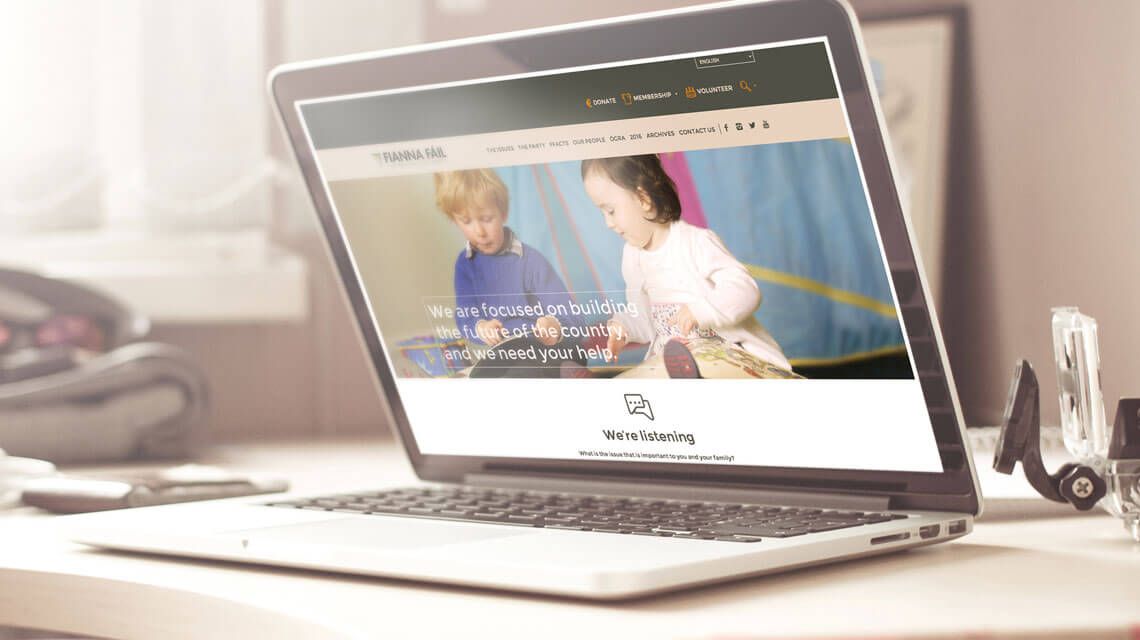 All websites need to engage and inspire. But we also needed to communicate party policies and current issues in a clear and upfront manner: to develop a two-way conversation that involved the public more and leveraged that grassroots strength.

So, we introduced interactive touchpoints throughout. A live opinion poll on the home page to involve the viewer and provide valuable feedback to the party on what is currently concerning the nation. We made it easier to share information and contact representatives. We recognized that many people wanted to have a say on the development of their party and to want to be equipped with the tools to become advocates again of an organisation that they still believed in.

Key to this is the development of a social media oriented campaign called FFacts (Fianna Fáil Facts), which is a mechanism for the rapid spread and sharing of the true facts on where the party stand on topical issues. For the many stakeholders involved, from the public through to councillors through to TDs, being able to instantly access up-to-date information is key to a unified, democratic message.

To acknowledge the great history of the Irish state (and in particular the upcoming celebrations around 1916), we also added an archive feature where people can share their personal visual memories of the party and the early decades.

We conceptualised and presented two concepts for the FF website along with the navigational structure and functionality for each option. These options indicated how the tone of voice, style of imagery, supporting graphics and colour would help to communicate the party’s key messaging.

The preferred concept is selected and we refined and amended accordingly from feedback received. A timeline was established to gather client-provided website imagery and also for the provision of website text content. After the design of all pages and the navigational structure and webtree is finalised the full development of the site began, with associated feedback and sign-off points.

When full cross-browser and platform testing was completed the site was launched. Create then provided Fianna Fáil with full CMS training in-house and a comprehensive training manual. Any items that needed Create’s continued support were agreed on.

“Thank you for your great work on our new website – you sought to understand our requirements and party attributes from the outset. We are very pleased with it and the reaction has been very positive and welcoming – great job!”

We’ve produced a contemporary online presence for a party that views itself as dynamic and forward-thinking, and one that can draw on a century of experience. We are delighted that Fianna Fáil has recognised that it is a vital part of their overall strategy for growth; that they’re committed to developing a stronger connection with their members and to inspire others who wish to get involved in Irish politics.

Graphic design for an educational event